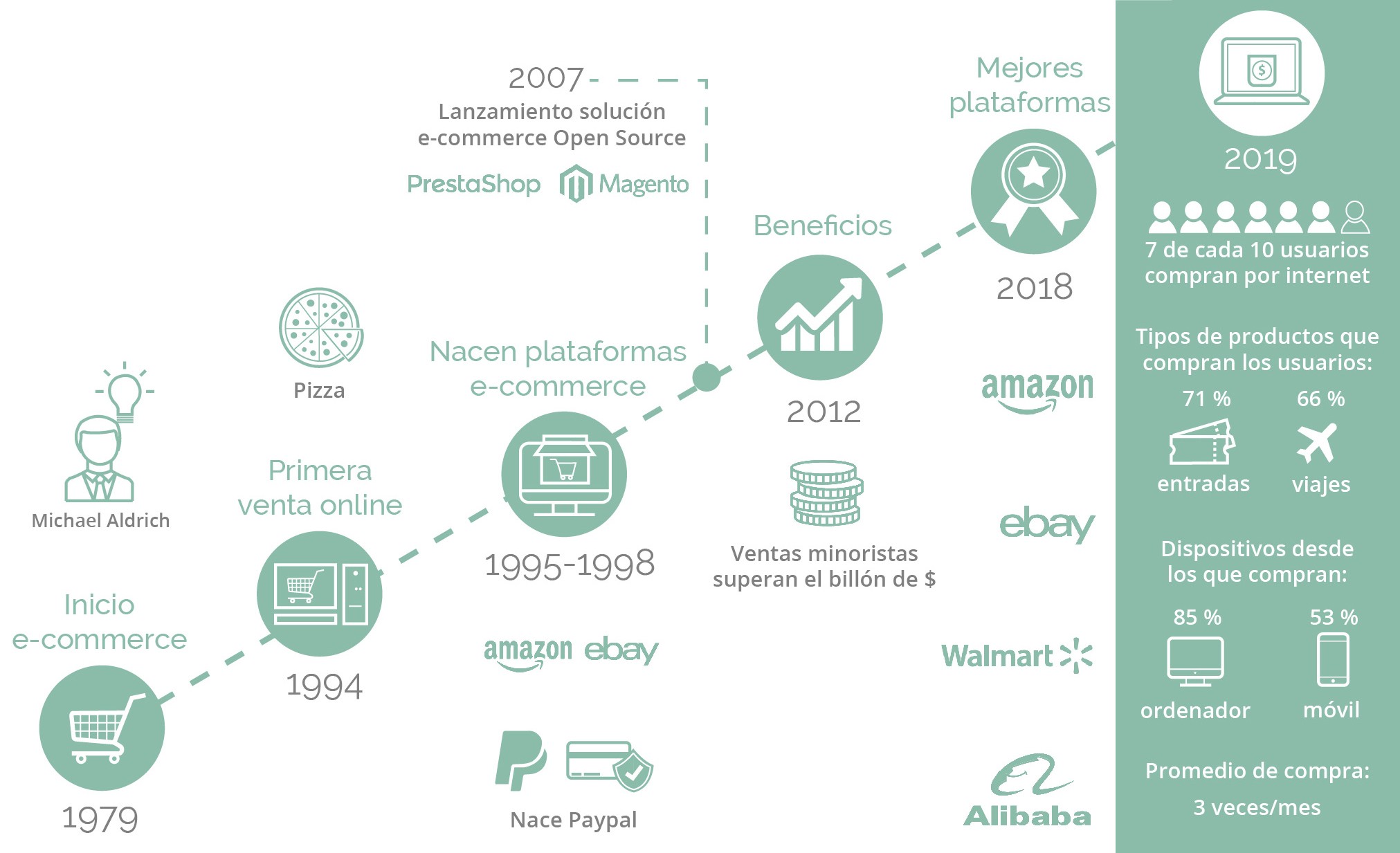 The day traders have long been waiting for is now just around the corner. The future of ecommerce is more than secured. A clear example of this is Black Friday, a day that sees businesses reach their sales peak. People are increasingly choosing to shop online: thanks to mobile devices, omnichannel strategies, secure payment methods, and the convenience of shopping from home, there's no valid reason not to shop online. Today we're going to give you a brief overview of the history of ecommerce and look at how it's evolved in recent years.

The history of ecommerce began in 1979, when its inventor Michael Aldrich succeeded in connecting a household TV to a computer to process orders in real time via a telephone line. But although the beginnings of ecommerce date back to the eighties, it wasn't until almost a decade later in 1994 that the first online sale was recorded: with Pizza Hut offering a pepperoni pizza via its website. The following year in 1995, two of the most prominent online sales platforms emerged: eBay, founded by Pierre Omidyar, and Amazon. At that time, online shopping still wasn't very accessible, and people were also reluctant to make payments online for fear of fraud. It was then that Paypal surfaced, in 1998. As the years went by, people gradually began to open their minds to the idea of buying online; so much so that in 2005, JC Penney became the first chain to achieve a billion dollar turnover through online sales.And since not everyone could afford to launch an online platform - or didn't have the right knowledge to do so - Prestashop emerged in 2007, and Magento the following year: two of the most popular open source ecommerce solutions.The combination of these new tools and new technologies saw sales grow exponentially; in 2012, retail sales in the United States exceeded a trillion dollars. Since then, ecommerce has grown year-on-year, and whilst there have been few changes in terms of new developments on these platforms, businesses are putting more and more emphasis on this path to reach bigger audiences - and higher profits. In 2018, the highest valued companies in terms of online sales platforms were Amazon, eBay, Walmart and Alibaba.

Studies on consumer behaviour are carried out every year. According to a 2019 IAB study, 70% of the population in Spain already buy online, mainly via their computer or mobile phones; in comparison with the previous year, the latter seems to be the preferred method for consumers, to the detriment of the former. The main products bought online are entertainment and culture, at 71%; travel and accommodation, at 69%; technology, at 62%; and fashion, at 60%: representing an average of three purchases per month with a spend of €64.

At AT Language Solutions our ecommerce site is Black Friday ready. All our products are available and easily accessible to customers. What's more, our website has been localised into different languages so that browsers can access it from other countries. Translate your ecommerce site and expand your sales horizons so you can reach bigger audiences. Ready? Contact us and let us know your situation. We'll look into your case and advise you on the best solution for you, and get your project going. Come on board with us and get ready for success!

Our translation service is compatible with Crowdin

The evolution of machine translation

Why should you translate your website into multiple languages?

How to connect WPML to AT translation services?