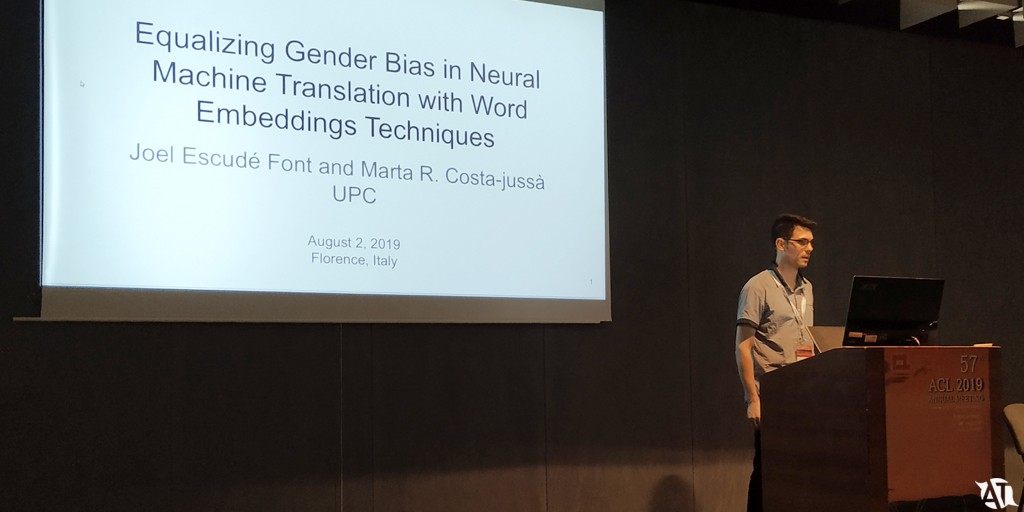 Joel Escudé, a computational linguist at AT Language Solutions, presents findings from his research into gender bias in neural machine translation engine training at WMT'19.

For the first time, AT Language Solutions played an active role in a parallel session at the Workshop on Machine Translation, under the framework of the 57th Annual Meeting of the Association for Computational Linguistics (ACL2019). The conference, held from 28 July to 2 August in Florence, is the industry's leading event. Major players in neural machine translation and artificial intelligence such as Google IA, Amazon, and Facebook all presented at the event, as well as several research groups from prestigious international universities, and companies that - like AT - develop neural machine translation technology.

AT had in fact already been involved in WMT'19 preparations by providing data used to assess one of the tasks, but being at the event itself meant we had the chance to catch up on the latest trends in this innovative industry, network, and make the most of the brand visibility we got from the event.

On top of that, our very own computational linguist Joel Escudé was a speaker at one of the parallel workshop sessions examining gender bias, presenting the conclusions of his thesis. To train neural machine translation engines we need to 'feed' them with millions of segments of text, and a lot of the time these bodies of text will contain gender biases. Thus, the engines 'learn' the bias and the bias is perpetuated as a result. The research examined the hypothesis that if by forcing certain conditions using two different strategies it would lead to an observed reduction in gender bias in the output translations. He presented his methodology at the session, along with results showing that in spite of the forced conditions it was possible to maintain the integrity of the system and slightly reduce gender bias. The conclusions from the study could be a starting point for future research and lead to significant improvements in the accuracy and naturalness of language in neural machine translation. Read the original article for more technical information on the methods followed in the research and the results.

Computational linguistics - especially in relation to neural machine translation - is advancing exponentially, and demand for artificial intelligence services is expected to grow in the near future. And so far the sector, in spite of being highly competitive in terms of launching new developments, is proving to be a particularly collaborative and active research community: one where working groups are formed, enriching feedback is given to other colleagues' research, and knowledge is shared to improve translation engine training. We at AT are proud to be part of this community, and hope we can continue to contribute value to events like this one and learn from the conclusions presented, so we can continue to be leaders in technology solutions adapted to the translation needs of every customer.

AutomaticTrans is now AT Language Solutions

Advantages of working with a translation agency